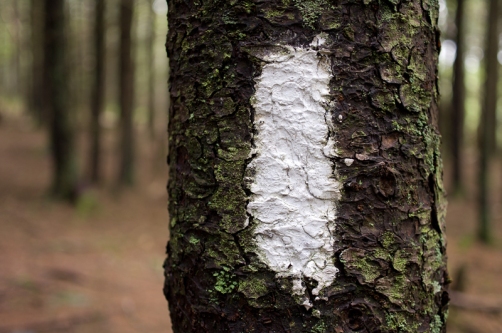 Me, versus the formidable Knobstone Trail.

38 miles of treacherous terrain. Endless ascents and descents along the hillside. Several battle scars (okay, they were only blisters), and a wicked cough. They don’t call this the Little Appalachian Trail for nothing. It kicked my butt.

Okay, okay. I may have exaggerated just a little; BUT not by much.

Last week, a close friend of mine posted on Facebook that he wanted to go on a weekend hiking trip. I’ve always wanted to do something like that so I decided to make a quick trip to REI: purchase the essentials, pack my bag and off we would go! The only I forgot to ask was where we were going. However, in all reality, it would not have mattered much since I had never heard of the particular trail before and I would have probably been too lazy to look it up.

We set off at about 8:30am on Friday morning. Another friend joined in; that made two with military skills and I wasn’t one of them. They also had quite a bit of experience hiking, backpacking and map reading… I knew absolutely nothing. Are you beginning to see the pattern?

As we began our trek through the woods, I fell into the last position. I was enjoying the scenic views, the crunch of the leaves under my feet, the sounds of birds chirping, the crisp cool air and just the overall picture of the autumn woods.We climbed hills, scooted down ravines, walked through dried up streams and hopped over fallen trees. By mile 10, I was getting a little grumpy.

At the beginning of the journey, I vowed to myself that I would not complain. Whatever the other guys decided to do, I would get in line and move. I wouldn’t ask, ‘”Are we there yet?” or, “How much further?”.  I may have thought those very things, but I would not dare ask them aloud.

As my grumpy attitude turned to anger and spite, I decided I would take the lead. If we had a specific mile marker to get to, why not move a little faster in hopes of reaching our goal sooner? Because that would also mean that I could set up my tent, take off my boots and nurse my poor feet back to health!

At the next path crossing, as the other two looked at the map, I stepped into the lead position and took off with them taking up the rear. I was still somewhat enjoying the sounds and the views that the wilderness had to offer, but I was primarily just looking down at my footing, trying to ensure that I would not have a misstep, causing myself to fall.

I wasn’t even settled into my new spot in line when I felt an overwhelming sense of fear. The entire time that I was following, I didn’t have to look around and pay attention to the white markings on the trees (called a blaze). I realized that it had been some time since I could recall seeing a blaze and I didn’t want to admit to my trail mates that I might have gotten us lost.

I kept walking, following the path before me. No one said a word. We began ascending up another hill and I saw it, I saw a blaze.

Words cannot adequately describe the relief that came over my body at that particular instance. Overall, my hiking experience was filled with pleasant memories. However, I did keep quiet much of the trip as I tried to reflect on my life, what it meant to be a leader, and allow God to speak to me through the experience of His creation.

In regard to leading my trail mates, and the impact of the blaze, I learned these lessons on the topic of leadership:

When following, I only had to worry about my footing and where I was going.

I had gone the initial 10 miles and not really understood what the blaze signals meant! I trusted my trail mates that they understood the general direction of where we needed to go, and how to effectively get there. As a follower, it was not necessarily my job to ensure that we were going in the right direction. However, it was my job to support the individual who was leading me through the paths.

When leading, I had to not only worry about my footing, but that we were always going in the right direction.

Sometimes, understanding the burden of leadership is the only opportunity to appropriately grasp the respect that the role deserves. I certainly did not want to turn around and tell my trail mates that I had gotten us off course, or even worse, that I didn’t have a clue where I was going. The responsibility had shifted for I was no longer responsible just for me, but I was responsible for others.

It’s easy to sit back and criticize those who lead. As the third person in line, I had the luxury to assess each step that the leader took and notice sometimes that when we had to re-route, there was a better way to get us to the destination. When leading, we don’t always have that luxury to be able to sit back and evaluate each move, sometimes the leader just needs to act…

Much has been said the last few weeks regarding our newly elected leaders and those who they ran against. It’s been ugly, mean-spirited, and sometimes plain evil. However, they are our leaders. President Barack Hussein Obama has been one of our leaders the last few years, and I have respected his decisions, and the office that he serves.

I didn’t get to elect, or necessarily choose, who my leaders are at work. One could make the case that I chose to work there, but I didn’t get to handpick them. You may not have gotten to select the pastor of your local church congregation, the new CEO at your company, or even your school board commissioner.

Every one of us has been uniquely crafted with particular skills, assets, personality traits and gifts. We need to use them collectively and work together, appreciating the roles that each of us have. We may not always get to lead, so when we are following, we follow with all of our heart and support the ones who are leading. In the moment when the baton is passed to us, we lead with integrity, understanding the gravity of our situation and the responsibility that we have to those whom we are leading.

Appreciate those who are leaders in your life. Those who you chose AND those whom you may not have chosen.

This entry was posted in Life and tagged Christianity, hiking, Knobstone Trail, leadership. Bookmark the permalink.